The video I have included below definitely is NOT my style of music, but I know that many of the younger generation like it.  However, the style of music isn’t the issue or the reason I have posted it here; the message of the lyrics is the issue.  This video is tremendous in exposing many of the false teachers who are filling the airwaves of our world with their doctrinal heresy, bilking the unsuspecting of their finances, and claiming to do it all in the name of Christ.

I’m sure that some would argue that Rick Warren should not be included in the plethora of individuals which the musician, Jovan Mackenzy, identifies as false teachers and heretics.  I’m not sure that I would agree with branding him a heretic, as I think the jury is still out on that. But I would say that Warren plays fast and loose with the content of the gospel message, watering it down to a very tepid version of “easy-believism.”

Anyone who carefully reads Warren’s mega-bestseller, The Purpose Driven Life, will find that nowhere in the book are readers told that sinners are under the wrath and curse of God unless they believe on the Lord Jesus Christ and his atoning sacrifice on the cross. Instead, Warren retools the Gospel message to appeal to the unregenerate. Apparently he does not believe that God's purposes are declared in his revealed Word, but rather teaches that the unsaved should go on a journey of self-discovery in order to locate God's purposes for their lives.

Warren has never publicly affirmed the historic, orthodox, reformed understanding of the gospel; probably because for him to do so would mean that he would immediately lose his power and influence in our society and among its politicians.  A pastor I greatly respect, John Piper, has stated that Warren has privately affirmed to him that he holds to the reformed doctrine of the gospel, but Warren has never stated such himself publicly.  That bothers me greatly, because it seems that he is more concerned about his standing with men than his fidelity to God and His truth.

So while I would not necessarily lump Rick Warren in with the rest of the people in this video whose doctrine is clearly heretical, I understand how Jovan Mackenzy can reach the conclusion that Warren belongs in the mix.  So listen carefully to the lyrics of the music because it has never been more important for us to identify false doctrine and those who are teaching it so that we can both avoid them and warn others who may be deceived into following them to their final destruction.  Enjoy…that is, if you enjoy this style of music! 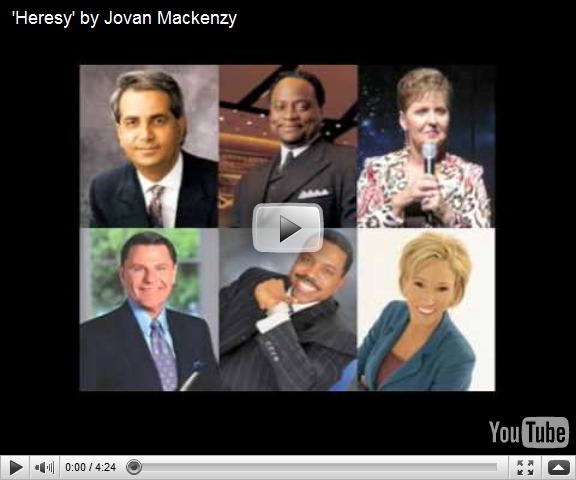 Bruce, Did you get this song from Jeff Elam?

No, I got it from Austin Primis who had a link to it on Facebook.