The Next Step: Infanticide 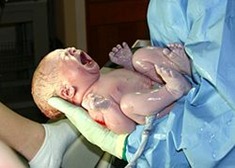 Recently, two professors calling themselves “ethicists” published an article in the Journal of Medical Ethics attempting to justify what they termed “after birth abortion.”  The term is an interesting one because it is specifically designed to blunt the outrage that would undoubtedly occur if the procedure they are recommending was called what it has been known as throughout human history—infanticide.
These two professors—one from the University of Milan (Italy) and the other from the University of Melbourne (Australia)—do not attempt to hide their agenda.  They argue that newborn babies are unable to understand events taking place around them and cannot anticipate what may occur, and therefore do not truly possess the necessary characteristics to be considered to have reached personhood status.
The professors acknowledge their preference for the term “after-birth abortion” rather than “infanticide” because they claim that the birth of the child is not morally significant.  They justify their position with two arguments:
First, they state, “The moral status of an infant is equivalent to that of a fetus, that is, neither can be considered a ‘person’ in a morally relevant sense.”
Second, they argue that “it is not possible to damage a newborn by preventing her from developing the potentiality to be a person in the morally relevant sense.”
These two arguments lead them to this conclusion: “The moral status of an infant is equivalent to that of a fetus in the sense that both lack the properties that justify the attribution of a right to life to an individual.”
In other words, an infant is not significantly different than an unborn fetus, and thus, so long as that infant remains so, it is perfectly justifiable to terminate that infant’s life.
Now, we must first understand that this viewpoint is the logical next step to abortion.  The basis of the whole argument for abortion is that the fetus lacks moral status as a human being.  So to argue that it is okay to execute a newborn infant isn’t a significant leap in moral laxity from arguing that it is okay to perform a late term abortion on an unborn child.  And in the same manner, it is not a significant leap to then argue that it is okay to euthanize those adults who because of mental disability or dementia are not capable of understanding the events taking place around them, anticipating the future, and reacting appropriately to such.

What the professors and the pro-abortionists neither understand nor believe is that human beings do not receive their moral status as persons because of their abilities to think, act, and react by some human determination of personhood.  Rather, man’s moral status is determined because he has been created in the image of God (Gen. 1:26).  Nothing more, nothing less.  It is only because the unborn fetus, the newborn infant, the mentally handicapped individual, and the elderly person whose reasoning abilities have been taken by the ravages of dementia all bear the image of God that they have moral status as human beings.  And because they all bear that image and thus have status as human beings, they are entitled to life so long as determined by the God who created them.  He is the One who determines what is morally right, not man, and He determines both the quality (Exodus 4:11) and extent of man’s life (Job 14:5).
So the professors may attempt to disguise infanticide by calling it “post-birth abortion,” but regardless of what they call it, it is still a moral outrage.  But what else should we expect from those who reject any objective standard of morality?
Posted by Bruce Mills at 9:42 PM
Labels: abortion, Bruce Mills, euthanasia, image of God, infanticide, medical ethics, morality