Would President Obama Bomb the Canaanites?

by Bruce Mills
I haven't written a blog post in over a year, and this post is no exception because it was written by someone else.  I've been so busy with my new responsibilities as the Executive Director of Verse by Verse Ministries (www.versebyverseradio.org) and other on-going ministry responsibilities that I haven't found the time to write anything worth reading.  However, I read a blog post today on Credo House Ministries Parchment & Pen blog that was so good that I had to repost it here.  It was written by Tim Kimberly, the Executive Director of Credo House Ministries, and addresses a major question that serious skeptics and atheists raise about God.  I hope this challenges your thinking and answers any questions you might have about these things. 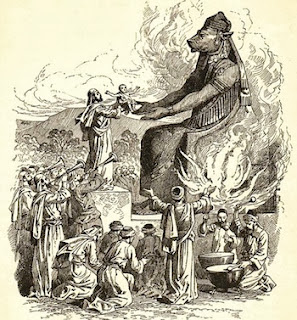 In addition to Baal worship, the Canaanites worshiped a god named Molech. How do you worship Molech? You heat a large statue of Molech up to an insanely hot temperature. You then take a living baby and place it in the hands of the Molech statue until the baby burns to death. Of all the world religions I have studied, the Canaanite worship of Molech is the most frightening. The Canaanites were not innocent people. If that’s how they worshiped their god, you can only imagine how they treated one another.
Do you think the continual burning of children alive, coupled with many other proven “crimes against humanity”, is much better than Syria utilizing chemical weapons in 2013? Many of the proven atrocities from Canaan, Babylon and Assyria would certainly have caught the attention of President Obama if these were countries today. President Obama, interestingly, was elected in 2008 with an anti-war platform.
In no way is my intention to debate if President Obama should bomb Damascus. I simply want to point out that an intellectual lawyer and community organizer was elected in 2008 partly on his insistence that he was clearly against the Iraq war. No one, Republicans and Democrats together, would have accused President Obama as being a war mongering leader. He already, however, bombed Libya in 2011 and tried to make a case for bombing Syria.
President Obama has come to recognize when an individual is in charge and has reliable information of wrongdoing, it may be necessary in the pursuit of doing good to destroy people. This is adult table conversation. I don’t think President Obama is a moral monster for wanting to bomb a country that is willing to use chemical weapons. I don’t think President Truman is a moral monster for dropping atomic bombs on Japan in 1945 responsible for killing more than 230,000 men, women and children. For some reason Jake’s parents voted twice for President Obama, possibly support the actions of President Truman, but mock God as a moral monster.
There are, however, some incredible difference between President Obama and God. The one difference most applicable in this conversation is that God is all-knowing. He is fully aware of every tragedy. He is fully aware of every horrific event. God does not need to wait for an investigation to be done. He does not need to send in inspectors, he already intimately knows the situation.
India was aware of that horrible gang rape, but God knew every rape that day throughout the world. It is amazing, I believe, that God allows any country to flourish. If any president had full knowledge of every thought and action, he would probably be seeking congress to bomb all countries of the world.
Our observation of the Old Testament, however, seems to paint the opposite picture of God.Yes, God did pull the trigger a couple times throughout history and dropped atomic bombs. Many more times, however, His mercy and patience far outpaced that of humans.
Jonah is an excellent example. God sent Jonah to tell Nineveh that they would be destroyed. The Assyrians were bastards. That’s the easiest way to explain them. They invented ways to torture people. Crucifixion was first developed by them. They are known for conquering countries and then putting giant fish hooks through the cheeks of conquered people and marching them all the way back to Assyria. The Assyrians would have violated the Geneva Convention every day.
Jonah, famously, goes in the exact opposite direction of Nineveh. Why? He knows the type of God he serves. A war mongering moral monster? No. He knows his God is quick to forgive people. He is slow to punish. He is slow to avenge. Jonah doesn’t want Nineveh to have any chance of forgiveness. Jonah wants to fly the Enola Gay over Nineveh. God, however, is more restrained than Jonah. He wants to give Nineveh a chance to repent. The book of Jonah is an adult table book. God forces Jonah, kicking and screaming, to Nineveh and the people repent. The book ends with Jonah wanting to commit suicide because God forgives people who don’t deserve it.
I am convinced, using only evidence from the Old Testament and the news today, that President Obama would have called for the destruction of Canaan long before God gave his assent.